Everybody who has a dog and yes, even those without all know what fetch is.  The trademark game to play with your dog has been around since the beginning of dogs interacting with humans.  Yet for many who own a dog, a mental image of playing the game is about as close as they get to actually enjoying it. 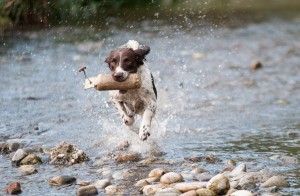 It’s simple.  You throw the ball and your dog blasts off after it in a cloud of dust and grass clippings.  Once in his mouth, the ball will go on a looooong journey before it ever finds itself in your grasp again.  Your dog loves to chase the ball, get the ball, hold on to the ball, and enjoy the ball all by himself at that point.  Your attempts at the game of fetch consist of one throw and zero retrieves.

It’s even more simple than the problem itself.  Instead of playing “fetch”, play a different game altogether.  We will call this game “2 Ball”.  No tricks here, you will simply use TWO balls instead of one.  You throw one ball and as your dog gets it and perhaps begins to move in your direction you take out the second ball and let him know you have it.

The key is that at this point you have to do some salesmanship.  Your job is to make your dog think that the ball you have in your hand is more awesome than the one in his mouth.  As he runs up to you prepare to throw the 2nd ball.

Timing is essential here.  The moment the dog drops the first ball is when you throw the 2nd.  What you are teaching him is that he only gets the “cooler” ball when he spits out the 1st ball.

The next step is to get the dog to let go of the ball on command.  I’ll cover that in another Training Hack coming soon.