Turn on Your Radar!

I’ve always been a big Robert Redford fan as well as Brad Pitt. There is a scene in a movie they both were in, Spy Game, that came up in a dog related situation the other day that I think is super important to share.

If you haven’t seen the movie you should, it’s great. There is a scene in particular where the seasoned CIA “spy handler” played by Redford is teaching an aspiring spy played by Pitt how to be observant.   The two sit in a restaurant and Redford demonstrates how without appearing to do so, he has cataloged everybody in the room into his memory and determined whether there are any potential threats.  While very impressive, I wouldn’t try this trick on a first date as the creep factor might be a bit too much to deal with. 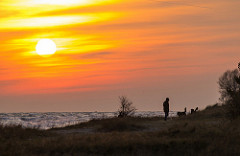 WHAT’S THIS HAVE TO DO WITH DOGS?

When at the park with a friend the other day with a very high drive and reactive dog I am working with, my friend asked to participate in the game of fetch I was playing with the dog. I quickly obliged and explained where I wanted him to throw the ball. When asked why I wanted the ball to be thrown in a specific direction, I explained to my friend that there is a Great Pyrenees dragging a 90lb woman around the parking lot to our 6 o clock, a small Havanees/mix off leash with a senior citizen struggling to use a cellphone at our 8 o clock, and a cat stalking something along the fence line about 100 yards to our 9 o clock. Hence why I said throw to our 12!

He laughed and jokingly asked if I used to work for the CIA, brought up the scene from that movie and then I explained to him one of the most important aspects of dog ownership.

Whether you have a dog that you know has challenges with certain elements of the environment or you have a super stable well balanced dog who could care less about anything, your head should be on a swivel when out in the world with your dog. As far as I am concerned it comes with the package of responsibility that is owning a dog.

If I know my dog has issues with cats and there is a strong chance I will lose control of her if she gets within proximity of one, then I’m always looking to make sure I see the cat before she does. This gives me the ability to control the situation and perhaps turn it into a training moment.

Where some people get confused is when I say that even the stable dog owner should be as diligently observant. While your dog might be fine, what bout the other less observant  owner of the dog that is NOT stable? My job is to protect not just others from my dog but, even more importantly to protect my dog from others!

If there is a threat in the environment I need to be the first one to know. Yes, I realize one of the perks about having dog is that they provide an element of security and protection for us and yes sometimes it is the acute senses of smell and hearing of the dog that let me know when something is up. However, that doesn’t let me off the hook for doing whatever I can to protect my beloved canine from its own desires and drives or the desires and drives of another. Once I enter the outside world with my dog my radar is ON.

It is our job to protect them first.  Accept the responsibility or get a goldfish.