When Everyday is Hump Day – Why Dogs Hump 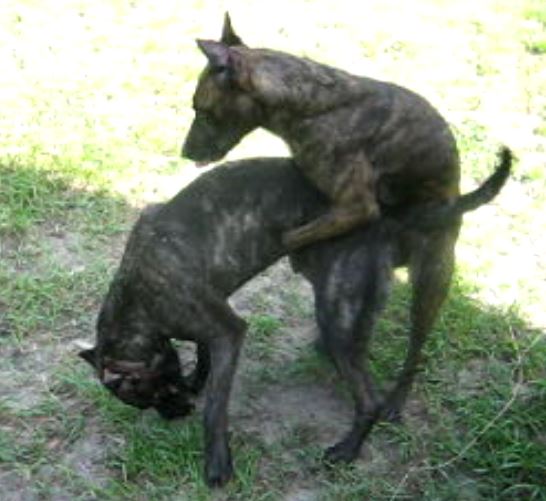 I always find myself chuckling slightly when reading a post, message, or email regarding an issue somebody is having with their dog humping.  Call it the inner middle school boy trapped within me.  It isn’t that I find their perdiciment amusing or that I am passing judgement, it’s just the word and the visual.

Dogs do it.  Boy dogs, girl dogs, dog’s that have their boy and girl parts, and those who simply have a scar to indicate the absence of the parts that once were there. They all do it.

You can see it coming most of the time.  There are a few tense awkward steps as the impending hump is about to begin. The dog gets close, alters its head posture to ensure it’s looking down on the victim.

While this is a behavior that we all can identify when we see it, identifying the cause of the behavior is done with far less accuracy.

I do my best to maintain my composure when I see folks rush to type out the dreaded “D” word….

We have been so conditioning to use this word to explain so many behaviors.  It is the go-to word when in doubt and unable to provide any other rationale, just say “dominance”.

While in some cases dominance is the catalyst for this behavior, more often than not, it is NOT.  Seriously.  It isn’t.  To understand why dominance isn’t the most common reason for this requires a bit of a rewind and refresher in canine behavior and learning theory.

Use your imagination for a moment.

Imagine every dog is born wearing a fanny pack.  In that pack is an assortment of behaviors that the dog can use in a variety of life situations.  Things like barking, growling, bowing down, jumping, nipping, and humping, are all pre-programmed by genetics and mother nature and come in that fanny pack.

As the puppy goes through life experiencing all the various situations life has to offer, it will continually go into the fanny pack and pull out and try various behaviors.  If a behavior produces the desired response in a situation, then that behavior will be used again.  We would say that behavior has been positively reinforced by the consequence thus its increase in frequency ( click HERE to learn more about those terms and what they mean).

If a behavior does NOT bring about the desired response, it gets put back in the pack and another one will be tried.  This will go on and on until the desired outcome or consequence is achieved then whatever behavior elicited that response will be tagged as successful in the dog’s memory and used again and again.

So now that we brushed up a bit on how a behavior becomes stronger, and I already said this particular behavior isn’t always, and in fact rarely is a result of dominance, what the hell is going on?

Humping is one of those behaviors in the fanny pack.

Dogs have a lot of behaviors that have specific purposes yet are used “out of context” simply because at one point in time that behavior happened in the out of context situation and it was reinforced somehow or some way.

Other times, the behaviors do have alternate purposes and it requires a bit of understanding on the specifics of canine behaivor to identify those alternate purposes.  For example when a dog shakes yet they aren’t dirty, dusty, or wet, it is their way of “shaking off” stress or anxiety.

The fact that often times you will see females doing the humping is further evidence that this is an out of context behavior, as that is not exactly how female dogs engage in the act of procreation. 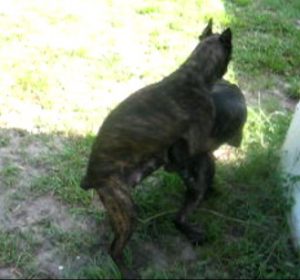 The offender is the female, the victim, the male

At one point in the dog’s life, usually during puppyhood, the behavior of humping was experimented with and the result was rewarding for the dog in that given moment.

If the puppy wanted to play, and it humped a littermate, and the littermate engaged in play, then VIOLA! The humping was positively reinforced and will happen again and again.

If the dog is super wound up and extra squirrelly, rational behavior choices aren’t always the first to be made.  This is when the dog is prone to dip into that fanny pack with a little less deliberation and choose an out of context behavior to deal with or cope with the stress.

We do this ALL THE TIME!

Think about things like tapping your foot, biting your nails, and eating, yes, eating.

These are all things we sometimes, or often times, do when we are worked up, anxious, or stressed out.  Dogs are subject to the same types of behavior choices and humping is absolutely one of them.

What Should You Do?

Honestly, most of the time I suggest simple re-direction.

Re-direction is a skill that every dog owner must really focus on getting good at.  We do not need to always “correct” or “punish” our dogs especially for behaviors that really aren’t all that “harmful”.  Let’s face it, the real harm of most humping situations is an uncomfortable embarrassment if others are nearby.

That’s a human problem, not a dog problem!

Depending on the dogs involved, that “miscommunication” can be as easily mistaken for an attempt to dominate by the hump-ee as it is by most keyboard dog training experts.  This is where the humping could be problematic because that dog might decide to respond with a quick burst of “Get the hell off me asshole!”…and that could involve teeth.

This is why re-directing the dog’s attention via a simple verbal cue to perform an already trained behavior, or to simply disengage the humping should be the first choice.

This is just a super short summary of what’s going on.  The reality is humping can occur for a variety of reasons, non -dominance related reasons, and some of them do have roots in sexuality.

Click HERE to read more on the subject and see a study that was conducted to try and shed some light on this frisky topic.